The pleasantly smooth smoking experience for small joints. When smoke passes through an activated charcoal filter, a large portion of the harmful tars in the smoke sticks to the charcoal. This makes the smoke pleasantly smooth without affecting the quality of the buzz.

actiTube activated charcoal filters:
– improve the taste of the smoke
– reduce the amount of tar that reaches your lungs
– make harsh blends taste smoother
– make it easier to smoke pure

In 1998, the founder of actiTube got a tip from his doctor friend, who said you could filter the smoke of your water pipe with active charcoal in order to reduce the impact on the lungs. On the same evening, the first tests were made with a bong using a charcoal filter. Although the founder was very critical in the beginning because he was worried about filtering out the THC, two years later he firmly believed in the advantages of this kind of filtration. That’s how the idea developed to offer all cannabis connoisseurs a filter which reduces harmful substances and improves the taste. 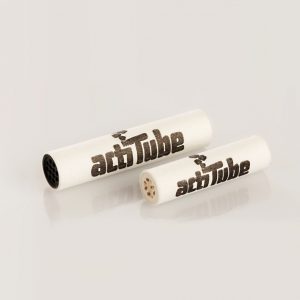 Winter advice: at temperatures below around +5°C (40°F), the smoke condenses on the cold active charoal (instead of being filtered by it) and can clog up the filter. That’s why our recommendation for the cold season is either to smoke inside or try to keep the filter warm (at body or room temperature) until lighting up.